The Waterfall Game is a drinking game for three or more players of 18+ years of age with a duration of about fifteen to thirty minutes. All you need to play is a Waterfall card game and the beverages of your choice.

The Waterfall Game is best played with beer or mixed drinks. Beverages which are higher in percentage (e.g. liquor) may also be used, of course. An alcohol free variation with soft drinks is fun, too. 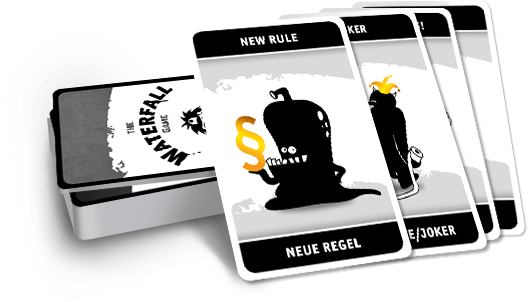 In case you want to play The Waterfall Game with high percentage alcohol, we recommend taking the “Deal 10” card out of the game.

3 players or more
age 18 plus (depending on the legal drinking age of your country!)

The Waterfall Card Game
alcoholic or other beverages

Like any other drinking game, playing The Waterfall Game requires a responsible use of alcohol.
Hence you should always make sure that all players are old enough to legally drink alcohol and that alcohol consumption is kept in reasonable bounds. Keeping that in mind, there‘s nothing in the way of an enjoyable game experience!

All players are seated at a table. Every player must have a drink at reach.

The card game is shuffled and placed in the middle of the table, face down.
This stack is the play deck.

The oldest player starts. He (or she) turns over a card from the top of the play deck and executes the action shown on the card. After the card is turned over and its action has been executed, the next player in clockwise direction is at turn. The used cards are discarded on a pile, next to the play deck.

The game ends, as soon as the action of the last card from the play deck has been executed. If at that moment any player still has cards in front of him, they are simply returned to the discard pile.

The following cards are included in the basic version of The Waterfall Game:

player who turns over this card has to take the number of sips shown from his own drink.

A player who turns over this card has to give out the number of sips shown among the players. He may also take the sips himself or deal them all to one other player.

The player who turns over this card has to audibly start counting by saying “one”. The next player in line continues counting by saying “two” and so on. As soon as a number is on that‘s dividable by or contains the number seven, the player, instead of saying the number has to say “bang!”. Each time a player says “bang!”, the direction is reversed. The previous player then continues counting with the next number in line (for example: “four”, “five”, “six”, “bang!”, change of direction, “eight”). If a player is caught saying a number that contains or is divisible by the number seven instead of saying “bang!”, the counting ends and the player has to take a sip. The same holds true if a player disregards the direction change. Instead of saying “bang!” you can also determine any other expression or action (like clapping hands), of course.

The player who turns over this card chooses a category (e.g. car manufactures, super heroes, countries that start with an “E”) and names a respective element (e.g. Audi, Superman, England). The next players in line now have ten seconds each to name a fitting term. If one player fails to name an element of the category or repeats one that has already been said, the category ends and that player has to drink.

The player who turns over this card lays it down in front of him, face up. From that moment on, the other players need to keep an eye on that player constantly, because: when the player with the Fidget acts strangely (for example by blinking all the time or rolling thumbs), the other players have to copy his actions until only one player is left. The player who realizes last that the player with the Fidget has just executed his action has to take a sip. Afterwards, the Fidget is returned to the discard pile.

The player who turns over this card states a new rule for the game. For instance: “Before drinking, a player has to say “cheers!””, “Don‘t touch the table any more” or anything alike. The rule takes effect instantly and only ends at the end of the game. A rule may never result in an endless loop though (e.g. after taking a sip, one has to take another sip), and may not affect only one, but has to affect all players. Players who violate a rule have to either take a sip or – if the rule is violated before or while drinking, their current count of sips is doubled. 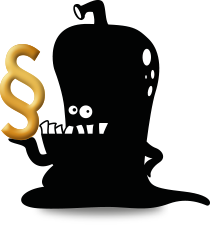 The player who turns over this card lays it down in front of him, face up. From now on, no other player is allowed to answer that player‘s questions. If they do answer verbally (gestures are O.K.), the Ghost is returned to the discard pile and the player who answered has to drink.

If this card is turned over, all players have to tip their foreheads as quickly as possible. The player who reacts last has to drink.

If this card is turned over, everybody has to take a sip.

The player who turns over this card lays it down in front of him, face up. It can be used by the player to go to the bathroom, while all other players have to stay at the table. As long as the game is interrupted by a Joker, all existing rules may be broken. Copycat and Question Cards have no effect during that time.
The Joker may instead be used to redirect the sips a player has to take to another player. After being used, the Joker is returned to the discard pile.

If this card is turned over, the direction of the game is reversed. 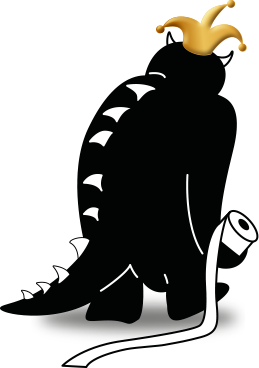 If a player turns over this card, a Waterfall starts. All players take their drinks and start drinking in one go until the player in line before them stops drinking. The player who drew the Waterfall card starts the Waterfall. Only after he stopped drinking, the next player in line may also stop.
Players who finish their drink during a Waterfall put it down immediately and may open another drink after the Waterfall.
If the game is played with high percentage alcohol, only the number of shots taken by the previous player counts. The following player has to take at least the same amount as his respective predecessor.

The player who turns over this card has to deal ten sips among the players. He may also take the sips himself or deal all ten to one other player.